Unlike the method of discovery applied to the natural world that is governed by unchanging laws of nature that we seek to discover, the method of discovery is different when it comes to human action and the centrality of human action in the social sciences. The way one economist puts it is that “Actions are the field of phenomena which constitutes what we regard as the subject matter of the social sciences” (Hans-Hermann Hoppe, Economic Science and the Austrian Method, 35).

Nature is an endless succession of necessitated events, of cause and effect of entities that are incapable of seeking a specific goal or end. Wherever humans are involved, things are different because humans possess volitional consciousness, are goal-directed, and act purposefully in pursuit of self-chosen ends.

In this respect, human beings are not like billiard balls or the weather. Humans have the capacity to make choices and strive to achieve goals through self-initiated purposeful, goal-directed, action. At the same time, humans are constrained by, and have no escape from conforming to, the causal laws of nature that govern the universe, the same natural laws that are applicable to all entities.

The traditional experimental methods of science we think about as the archetype for the natural sciences (dropping weights from towers, rolling marbles down ramps, growing cultures in petri dishes, etc.) that are painstakingly designed and undertaken by scientists to engage in the discovery and identification of the nature of entities and their relationship to other entities, are inappropriate for the study of those aspects of science involving human action.

It is an inescapable fact that human action and the logical implications arising from human action must be taken into consideration when understanding and studying subjects like economics, business, psychology, health care, medicine, politics, law, and engineering, for example – in every instance where human action is involved and wherever the improvement of the human condition and removal of felt uneasiness is the goal.

Wherever the discovery of knowledge is undertaken as a means to an end (i.e., purposeful action is undertaken), the methodology must be consistent with the intended purpose of identifying knowledge to advance human welfare. The irony is that science holistically is a quest for knowledge undertaken through human action, and is therefore subject to the science that studies human action (Mises called it Praxeology – the science of human action).

Whenever there is human action there are people with motives making choices to influence and affect desired outcomes. In the natural sciences, where the goal is to identify the nature of matter and its interaction with the forces of nature, the objects of study merely exist and interact with matter according to the specific nature of each entity and its environment. But the actof scientific investigation engaged in by scientists exists in a broader context of human action in which people are purposefully engaged in the act of discovering universally valid laws of nature that are established experimentally and analytically, and subject to repeatability and independent verification.

It is explaining this sort of difference – what Jordan Peterson might distinguish as science and meta-science – that I think Peterson was grappling with in his discussion with Sam Harris about the nature and validation of truth.

In the Harris-Peterson discussion, Sam Harris attempted to limit the scope of consideration to the materialistic and deterministic world of pure non-teleological causally necessitated succession of events that is the domain of the natural sciences. Harris sees human action through a purely materialistic lens whereby all human actions arise from and are rooted in an unbreakable causal chain we can never discover nor escape. Harris holds that free will is a peculiar illusion necessitated by the human brain, a deterministic self-deception. Because he holds that free will is an illusion of human consciousness, he posits positivism as the only valid methodology of discovery.

As against Harris’s mechanical materialism and positivist paradigm, Jordan Peterson sought to expand the scope of the discussion to include in the mix the self-motivated end-seeking behavior of human actors, and non-positivist phenomena such as motives, purposes, aspirations, values, and normative judgments. Peterson sees these self-evident “existents” identified through the action of introspection and as valid premises in establishing knowledge of a scientific nature. But for Harris – and empiricists in general –such things as motives, purposes, aspirations, values – are not empirically verifiable and thus are not valid premises of scientific methodology.

For Peterson, Harris’s position is too narrow to answer questions about knowledge and truth where human beings are involved. In the known universe, knowledge and truth only have meaning and context for human beings, who must rely on their volitional consciousness for survival. It appeared that Harris was arguing with Peterson that Peterson’s meta human-centric position unnecessarily complicates the search for truth in science and the technology required to partake in science by raising issues Harris felt to be beyond the scope or consideration of science.

It appears in my estimation that Harris and Peterson have two different concepts of what constitutes “science.”

By injecting discussions of human actions and motives into a discussion about the search for truth in science, Harris could only see that Peterson had abandoned the rigour and limits of science completely, and to the extent Peterson relied on the relation between science and human action, Peterson was abandoning any empirical claim to “truth.”

By refusing to acknowledge that science is a human action inescapably subject to undisputable, non-refutable, non-empiricist facts that cannot be established or tested by empiricist methods, Peterson could only see that Harris was unwilling to deal with the full body of established human knowledge, knowledge required for Harris to make any valid utterances or claims at all about “truth.”

Mises: The A Priori Nature of Human Action (pdf)

Barry Linetsky has learned a considerable amount from the writings of Mises and Hayek. Barry makes his living specializing in value-driven strategic management, and is the author of the acclaimed business biography The Business of Walt Disney and the Nine Principles of His Success (Theme Park Press, 2017) and Free Will: Sam Harris Has It (Wrong), both available from amazon. He frequently blogs at www.BarryLinetsky.com and has been published in the Ivey Business Journal and Rotman Magazine. Twitter @BizPhilosopher. 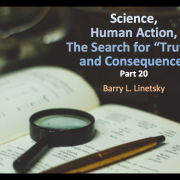 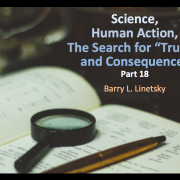 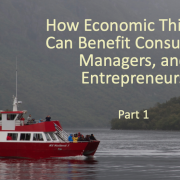 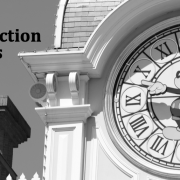 The Process of Creative Destruction in Walt Disney’s Success 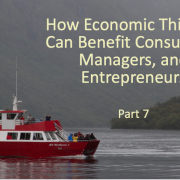 Barry L. Linetsky, 2019 How Economic Thinking Can Benefit Consumers, Managers, and Entrepreneurs | Part 7: The Search For A Valid Methodology Of Human Action 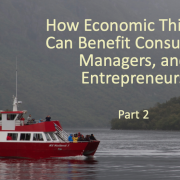 Barry L. Linetsky, 2019 How Economic Thinking Can Benefit Consumers, Managers, and Entrepreneurs | Part 2: Progress Is Not A Foregone Conclusion

Barry L. Linetsky, 2019 How Economic Thinking Can Benefit Consumers, Managers, and Entrepreneurs | Part 4: Why Can’t You Show Me Your Unicorn?

Science, Human Action, The Search for “Truth”, and Consequences...

Science, Human Action, The Search for “Truth”, and Consequences...
Scroll to top